BAILING OUT is live on (almost*) every store! It is a FREE prequel novella in my Snow-Crossed Lovers series and contains:

Grab it here for FREE:

Amazon (If it is not yet free on Amazon please grab it on Book Funnel until they price match! Sorry for the inconvenience 🙂

*Nook: I messed up my Nook store paperwork so if you are a NOOK reader please grab BAILING OUT on Book Funnel until the problem is fixed 🙂 Sorry for the mix up! 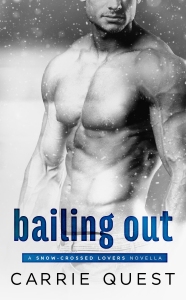 Gabriel Power came to Sochi with two goals: win a medal and track down his ex-girlfriend so he can finally explain the truth about the scandal that came between them. Once that’s done, he’s going to disappear. Snowboarding’s bad boy is tired of the phony photo ops set up by his media mogul father. Getting hounded by reporters and pretending to date supermodels while running errands for Power News cost him the only girl he’s ever loved, and now it’s time to walk away.

Quitting his father will be easy. Bailing on snowboarding will be slightly harder. Getting Belle to forgive him may be impossible, but he has to try.

Isabelle Garland’s Olympic dream died the night a drunk driver plowed into her car and crushed her leg. Sochi was supposed to be her moment of glory, but instead she’s limping around the Village trying to dodge the snowboarder who broke her heart and avoid the interviews her pushy sister-slash-manager insists are vital for building her brand. Belle doesn’t want a brand, she wants a life. Preferably one far away from the rude reporters who keep trying to get America’s Skating Sweetheart to cry on camera by asking how it feels when your entire life is snatched away in an instant.

(Spoiler: it feels like s***. Also, she’s more snark than sweet these days.)

When she runs into Gabe in the basement of her hotel, Belle’s first instinct is to flee. Too bad they’re trapped in a freezing storage room together with no way out and only their chemistry to keep them warm…